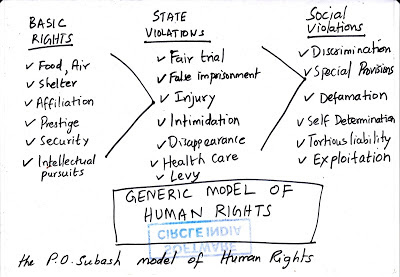 For long there is a confusion and lack of precise clarity about what Human Rights and its study is all about.I have already written about Human Rights earlier but felt it was inadequate and a precise and pointed view of the subject is mandatory.The above diagram shows the P O SUBASH model of human rights.

Basically as we go from left to right there are three tiers to it. The first tier is basic rights and the second tier violations by the state and the final tier is human rights violations in social context.As we go from right to left the seriousness of the matter increases and goes from periphery to the core of Human rights.

Note the basic rights which form the bed-rock of Human Rights and indicates the various aspects of it.Let me illustrate how Human Rights Regime influences Jurisprudence which can be seen in the case Dr.P K Mukundan Vs Calicut Medical College.The said person had an MD from Delhi after MBBS and had a second admission for MD at the Calicut Medical College.But apparently there was some confusion and the system was reluctant to award him a second MD because it could influence the economic earnings of doctors in that field...but the ruling of the court was to award him the second MD because he was competent and proficient. This is a classic human rights case or gets such a tinge because intellectual pursuits cannnot be forbidden and is a human right.

Note the second tier of Human Rights and touches upon various aspects of violations by the state.Note the issue of health care mentioned there which is obligatory on the state to provide.Also note the word Levy which means that the state cannot impose unnecessary taxes which would be violative of human rights.

Note the third tier that talks about Human Rights issues in social settings.Specifically note tortuous liability an important component added in the realm of human rights.Law of tort refers to civil wrongs.If there is an accident on the road it is the responsibility of on-lookers to help..if they willingly overlook their responsibility it is tortuous liability.In other words it is the right of the aggreived individual that he gets help from those around which is also a human right.

RIGHTS OF AN INFANT

Using the above model the rights of an infant can be assessed.Food air and shelter are the rights from tier 1......health care and prevention of injury from the second tier...and special provisions in the third tier like access to specialized attention.

RIGHTS OF A CHILD

Study the model ..in the first tier Food ,air,affiliation,security would be the key inputs and in the second tier it would be Health care,injury,intimidation and dissappearance..and in the third tier discrimination and exploitation.

In the Woman rights all the elements of the first tier are relevant but emphasis is on security..and in the second tier all factors would be equally important..and in the third tier Discrimination,Self Determination and Exploitation would be the key factors.

In tier one Security would be of paramount importance and in the second tier Health Care and Injury and in the third tier it would be special provisions or relaxations to the elderly.

RIGHTS OF THE DISABLED

In the first tier all the factors are important..In the second tier relaxation on certain levies..and in the third tier special provisions.

Posted by SUBASH NAMBIAR at 1:42 AM