Cricket  was a very different kind of a ball-game in the 1970's...unlike what it is  now. Test Cricket was the order of the day and One-day matches for all practical purposes were unheard of. A season of Test Matches were a festival season with kids and adults alike looking forward to it with baited breath. I would classify Cricket into three era's.The era of Radio Cricket  the 1950s to the 1980's...The era of TV cricket from the 1980's to may be 2000...and presently thre present Internet era of Cricket. Radio cricket was basically Test matches...TV Cricket is the one-day version of the game and the present era of 20-20 matches. 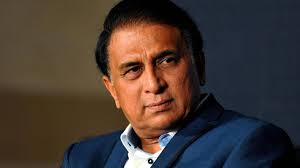 Test matches were a very long drawn affair lasting for five days most of the time without a precise result. The all-time great Gary Sobers was from the earlier decade of Sunil Gavaskar and  Gavaskar must have played in at the most one or two series against Sobers.

When we talk of India in World Cricket  Sunil Gavaskar would stand out as a legend of this era and maybe eras to come. GAVASKAR was the finest Test Opener the World has ever seen. Gavaskar was not a great hitter of the ball and may not fully qualify to be in the league of Clive Lioyd or Zaheer Abbas for he never made three centuries in his battle with the game but he brought great poise and discipline as a opener and hit many centuries with classical elegance and technical prudence which the basic tenets of Cricket is all about.Adequate credit has not been given to his mate in most of these ventures in Chetan Chauhan.It appears to me Gavaskar shared a fine rapport with Chetan Chauhan and whenever Gavaskar is spoken about Chetan Chauhan must be remembered too.Chetan Chauhan though he had a long stint with the game never made a century and was once out at 97 against the West Indies making many adherents of the game cry.

I dont know what is the future of Cricket. I definitely  don't see the fanfare that existed in the 1970,s today...will it fade into an Englishman's past-time again...one cant say.People today live in a different environment of Internet and all the paraphernalia that goes with it and the attention span   works in a spurt of small durations over diverse things lacking in the patience to sit in front of some media for long hours to watch one thing in a fixated way.

With the advent of one-day Cricket Gavaskar hanged his boots ,it was simply not his cup of tea but what is memorable is that he was part of the Indian victory of the Prudential Cup in 1983 and the Benson and Hedges trophy in 1984.His experience and expertise must have helped the Indian side achieve these victories.

Posted by SUBASH NAMBIAR at 9:56 AM