I  paid a short visit to the Manchanbele dam which is on the Arakavathy river technically within Magadi I had earlier written about the Arakavathy river...which definitely has its origins from within the Magadi hills.  The river is a result of rainfall on the vast stretch of Magadi Hills and flows downward towards the the other rivers that join the Cauvery river at Sangam near Kanakapura. 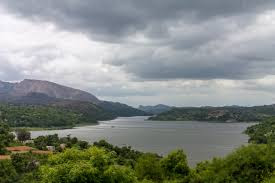 There are many theories about the Manachanbele dam. But  much of it is clear to me. The Arakavathy river on its downward flow forms a natural catchment area of a very large kind storing water thereby and the exit point from this catchment area by and large is a small aperture found on the downward side of the lake. In the event of rain there could be flooding if the water is not stored and hence the engineering idea of damming the outward flow with two  large gates. When it rains it is likely the gates are closed increasing the water level of the reservoir and preventing flooding downstream and the water carefully let out onto the canal while maintaining the level of the reservoir. It is a very essential control system here to prevent flooding thereby serving the twin purpose of maintaining a reservoir and preventing flooding.

Two views of the reservoir and its precincts  are truly endearing. The view of the reservoir itself from the main road with a wonderful array of hills in the background is truly a gift from nature and the other view is the twin gates of the dam down the slope. 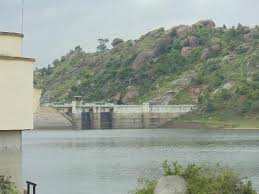 Manchanbelle dam is off the mysore road. The two nodal points in one's access to this place is first the dodda alada mara and  chandrappa circle. It could be some twenty kilometers from Mysore road.

Posted by SUBASH NAMBIAR at 6:53 AM