POWER FACTOR  correction is an important component of Electrical Engineering concerning Alternating Currents.When DC is passed through a coil the coil only gives resistance. When AC is passed through the coil it gives a vector sum of resistance and reluctance. Reluctance is the Magnetic component of the opposition to the flow of Alternating current. Reluctance comes because of the self induction component because the coil creates an opposing electro-motive force or emf because of self-induction. What is self induction? Alternating current passing through a coil induces voltage in the coil opposing the flow of current which is called Self-induction.

What are the consequences of  high inductance in an AC circuit. It increases current leading to power losses and creates heat from magnetization just like the heat created by a microwave -owen.It creates loss of power and adds to various forms of transients. It creates insulation failure and dis-orients electrical networks.

When an Alternating current is impressed upon a coil the current lags behind the voltage which literally means it struggles to catch-up with the Voltage. Larger the lag due to higher inductance lesser the fraction of useful power and higher the fraction of reactive power which is wasted in magnetisation and radiation of heat.

What is one of the solutions for this problem? Itis to shunt the circuit with an appropriate Capacitor. The Capacitor regulates voltage and reduces the lag of the earlier current passing through the coil literally absorbing reactive power and converting it into useful power.Such a measure reduces heat dissipation and increases circuit delivered power. The situation is similar to the relation between BHP,IHP and FHP in an engine. IHP is the integrated horse power the actual power created in the engine..FHP is the frictional horse power which creates heat and losses and BHP is Brake Horse Power the actual power delivered by the engine. FHP is akin to the reactive power in an electrical circuit which can be reduced by using Capacitor shunt which reduces this component.But how? Current through a Capacitor leads the Voltage.Capacitors block Voltage but its dielectric depending on the frequency passes current. Exactly opposite to inductive circuits in capacitive circuits Voltage tries to catch up with the current.

When I used to work in Electrical Maintenance long back I had developed a simple formula for arriving at the value of the Shunt Capacitor needed for any given Electrical network and also tested it with the hand book of Electrical Engineering and to my glee found that they match ditto.I was excited but left this area of Electrical Engineering for a short while to dabble with Information technology. Recently I tried to re-invent the formula few days back with some measure of success and I would like pundits of electrical engineering to put it to some form analysis to confirm if it works.

Note that large Electrical Networks are three phase and on the load side they have meters that indicate Current, Voltage and Power Factor and laso the Power. Our job is to note the Power factor and increase it to the level necessary.The basic analysis of such a situation can be done using a simple single phase diagram. 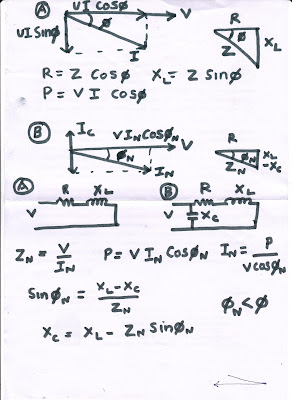 The above is an illustration of the above discussed matter.The whole thing needs scrutiny and testing.Two circuits of a simple kind are shown which are r-l circuit and in diagram B they are shunted by a capacitor. Power and Voltage are held constant. The phasor diagrams are shown  and note the impedance diagram. ɸn is the new angle after correction and  cosɸn  is the new power factor.