I was having a Milk Shake recently and happenned to remember the Banana Milk Shake and Mango Milk Shake which I used to have sometimes with my batch-mate S V Giri in Kettangal. Kettangal is a hamlet adjacent to REC NIT Calicut. During our times we used to visit Kettangal for milk shake which used to cost Rs. 5/- at one of those outlets run by some very elderly person. He used to peel the mangoes himself and empty them into an old mixi and a roar of the mixi for few minutes and he empties a thick soup of Mango milk shake into a tumbler and it was pleasure having one. It must have added value to our health in those days supplying vital nutrients to the body. 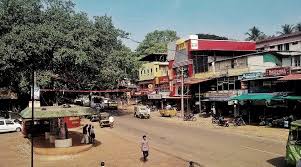 I have not visited Kettangal of late but must be more intense in population by now. Kettangal is basically a confluence of four roads. One that comes from Calicut via Kunnamangalam and proceeds to Mukkom, another that goes adjacent to the E hostel and proceeds to Koduvally, and another towards Mavoor .

Kettangal had some three hotels one of which used to be Ali's joint.In Ali's hotel you get Mixture with onion laced on it and on a rainy evening having it with a cup of tea used to be Heaven.

I dont know what would be the future of this joint? With increase in population may be the roads here might need widening which could change the face of this place. Kettangal! You were a joy of our lives on any given day not to mention the music played at some of these joints which could be heard aloud and a saloon nearby.
Posted by SUBASH NAMBIAR at 11:47 PM