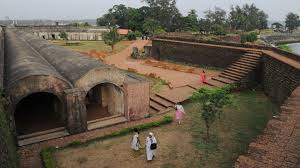 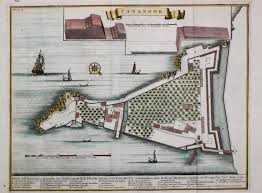 What is this St.Angelo fort Kannur?What is Kannur? Some of these questions might need immediate simple answers for the layman.

The story starts with Vasco Da Gama discovering India coming all the way from Portugual for spices grown in this part of modern day India.This is in 1498 and the spice trade began to grow in full bloom .Kolathiris were the kings of this place called Kolathunad. Spice trade was bringing earnings both for the Kolathiri and the Portuguese. To increase spices production they have to be treated and cleaned and preserved..which means they needed factories.The Portuguese asked the Kolathiris permission to establish a Fort for which they would pay. An ideal place was chosen along the Arabian coast some three kilometers from modern day Kannur town upon a cliff over some eleven acres of land with sea on three sides and there came the St.Angelo Fort in 1505.Construction started in 1505 and work completed in 1507..the fort being built with local stones.

Valuables were kept in the Fort; so the Fort could be attacked from Land and by sea..From the land side towards the entrance of the Fort a moat was built to be flushed with water from the Sea and to prevent attacks from the sea many a cannon was mounted.These Cannons could be seen from the sea and the place gets the name CANNONORE. A place of Cannons - the modern name of Kolathunad. Some fifteen days of voyage perpendicular to this point one would reach the African Coast.

Some of the key aspects of the fort in a nutshell;

THE FORT IS SOME FOUR KILOMETRES FROM THE CANNANORE CITY.

IT STANDS ON SOME 11 ACRES OF LAND 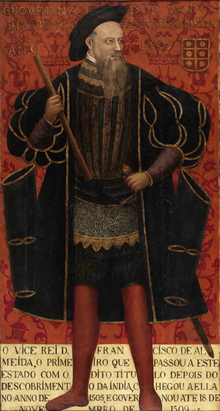 IT HAD BARRACKS FOR SOLDIERS, A CHAPEL, A PRISON, A WELL AND AMMUNITION STORAGE.

THE FORT LATER FELL INTO DUTCH HANDS AND THEN TO THE LOCAL KINGS AND FINALLY TO BRITISH.

THE BRITISH BUILD A FULL FLEDGED CANTONMENT IN THE ADJACENT AREA.

THE FORT STANDS ON A CLIFF

DUTCH GOVERNOR GODFRIED WEYERMAN MADE SOME ADDITIONS INSIDE THE FORT COMPLEX

A LAMP POST CAN BE SEEN WHICH WOULD PROVIDE LIGHT INSIDE THE FORT AND ALSO ACT AS A LIGHT HOUSE FOR MANY YEARS USING OIL BASED LANTERN.

SOME FORTY THOUSAND CANNON BALLS WERE EXCAVATED FROM THE FORT AND ARE KEPT ON DISPLAY.

A FANTASTIC VIEW OF THE SEA IS POSSIBLE FROM THE FORT AND FROM A PEDESTAL.

THERE IS AN ENTRY FEE OF RS. 25 TO ENTER THE FORT.

https://www.youtube.com/watch?v=2Zvz_WaJ-6c
Posted by SUBASH NAMBIAR at 5:51 AM