In most human cultures today around this shrinking World all humanity is discussing Global warming. To the less enlightened it is still a myth and to the more enlightened a nightmare.Some time back I had seen a long video presentation by Al Gore the former Vice President of the USA on this subject and even a picture of the worst in case the situation continues as it is today. There are so many theories about Global Warming and how to deter its onslaught. In essence large land mass adjacent to seas and rivers could be gobbled up by this phenomena from Shangai..to Kolkata ..to New York there will be no mercy.

Nitrous Oxide, Carbon dioxide,Ozone, Water Vapour and Methane are the gases responsible for Global Warming and they are called Green House gases.Note the basic molecules of these gases comprise of Nitrogen , Hydrogen, Oxygen and Carbon all of which are seen readily in nature and there is heterogeneous bonding of molecules.In all the Green House gases two to four molecules of one element bond with another element barring Ozone. These gases are called Green House because if we were to study an enclosure of greenery of some plants all these gases could be traced or are some form of stake holders.The manure used with plants have the capacity to generate Nitrious Oxide.

The present concentration of Carbon in the atmosphere is 400 ppm compared to some 20 ppm some hundred years ago. Note the Quantum growth.

There are two components to Global Warming ; the first being direct sunlight and the second being reflected sunlight.The gases mentioned above have the capacity of puncturing the Ozone sheath that protects the overall atmosphere of the earth there by leading to extra warming. In the reflected Component the surface of the earth reflects sunlight back into the atmosphere and the thermal energy reflected back by upper strata of the Atmosphere.Note an increased carbon concentration will increase the heat trapped warming the earth's surface and influence and alter climatic conditions including rain and wind patterns. Some of these chemical concentrations can trigger cloud-seeding thereby increasing rain fall and causing flooding adversely influencing the agriculture systems and human life.In my view point this phenomenon can also influence the working of large aircraft engines and can cause seizure due to increased  contamination of air sucked into the engines. 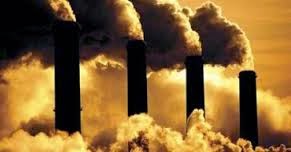 What would be the most serious fallout of Global Warming ?The warming of the Seas, the average temperature of Sea water would rapidly rise as the water heats up very fast and the increased heat can percolate into the depths of the sea thereby influencing aquatic life another source of food and nutrition for humanity. Increased heat means differential heating and cooling  of land surfaces and the sea would mean a different intensity of sea and land breezes and the wind systems around the world which depend on pressure differences between the sea surface and the land surfaces.

But these are not as serious compared to the melting if Ice-bergs and glaciers in the Arctic and Antarctic which would increase the level of Sea water which will encroach into the land thereby submerging coastal towns and areas.

Carbon emissions from vehicles around the World are seen as a key contributor of Green house gases and world  must be aware of this threat and it is upto every individual on this planet to understand the phenomena of global Warming and do something in his individual capacity however small to control and clean our Atmosphere which is so dear to us.
Posted by SUBASH NAMBIAR at 12:41 AM