THE GLORY THAT IS HAMPI

Living in the city of  Bangalore I made a mistake by not visitng Hampi before.I checked into one of the KSTDC tour for a few days which is called the  NKT North Karnataka tour largely due to some last minute cue and I thought it propitious to go on the trip and never regret having taken the last minute decision and the things that I saw at some of these places left me in  awe and spell-bound.Basically though we got to see many places Hampi and Gol Gombuz stand out and any person around the world cannot be forgiven for not visiting this place atleast once. 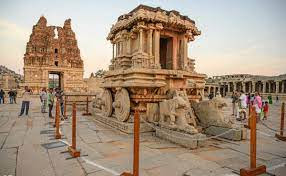 What is this place called Hampi? Hampi is a sub city in the overall design of the city called Vijayanagar.Where is Vijayanagar? Vijayanagar is an old time city like Bangalore which was the capital of the Vijayanagar kingdom.The city of Vijayanagar is some twenty kilometers in radius some fifteen kilometers from Hospet. Where is Hospet? Hospet is a modern day town in the so-called Hyderabad-Karnataka region adjacent to the Eastern Ghat Mountains.The bus from Bangalore goes along the Mumbai highway and turns right towards the Eastern Ghat mountains culminating in Hospet.

Vijayanagar appears to me to be a city of yore tucked between the Eastern Ghat mountains and the Tunga Bhadra river which is very broad and resouceful here.The Emperors of the Vijaya Nagar kingdom thought it  befitting to erect a city at this place because of the copious supply of water.Ground water may not be very deep.The rains drained water down the eastern ghat mountains were routed into specialized tanks  and stored and in the summer the Tunga Bhadra river served water to the township.
Hither-to I was under the mistaken impression  that the marauders who invaded the Vijayanagar kingdom in 1565 completely destroyed the city. They set fire to many wooden structures but structures built in stone stand even today very much in-tact and one must see this place for its enormity ,design and its imposing posture which leaves people wonder struck.
The entire city of Vijayanagar has four small townships. The Vittala Nagar , the Kamala Nagar, The royal enclosure and Hampi.Hampi is on the eastern ghat mountains and the other three townships in the space between the mountains and the Tunga Bhadra river.In Hampi most of the structures are stone carved and chiselled and in other places built with mortar and other construction material.
The Vittal Nagar housed the Vittala temple which is in ruins but a splendour to see with well ordained pathway leading to the temple.It appears to me a private temple of the royal house-hold. Note that at its zenith the entire city of Vijayanagar possibly hosted half-a-million people. Most of the temple is in ruins and is adjacent to the Tunga Bhadra river.The TB river is very broad here and is copious and some bridges have been constructed through the TB river in the past with stone pillars to spots across the river which must have acted as transit points to the world outside.
Few kilometers from here is the Kamal Nagar where the Lotus palace is situated and appears to me as a modern day equivalent of a Ladies hostel.There is a major elephant stable ..elephants were a modern day equivalent of a car which ferried people from one place to another. Few kilometers away from this place is the Royal Enclosure where the Royalty lived and conferred. Complicated water systems and tanks are abundant at this place with various forms of storage facilities. A pedestal exists here some thirty feet high with a flight of stairs and modern day equivalent of an open air auditorium visible from all sides.
We are slowly moving towards the Eastern Ghat mountains where the city of Hampi exists literally on the confines of the eastern ghat mountains ..the entire city being stone carved and chiselled the most wonderous component of the Vijayanagar enclosure enclosing ,encompassing and writ with monoliths and more extended stone carvings and temples and a full stretch of market places of yore and on one end is the Virupaksha temple ..a Shiva temple imposing in its demeanour even to this day be-speaking in silence the years of history that encompassed this place. How many centuries or years it took to erect such a structure is un-clear but it is truly a wonder and must see..stones of the eastern ghat mountains converted into gargantuan structures.
The entire city of Vijayanagar was possibly built of stones ,mortar and wood and the wooden structures were possibly burnt to the ground by the combined forces of  Ahmednagar, Bijapur and Golconda who razed this place un-abated for nearly nine months and looted the wealth ..but the larger wealth of ingenuity ,design , rhythm,posture and glory of this place remains in-tact and anyone who has not visited atleast the Hampi part of the Vijayanagar city is truly missing something un-forgiving and unique.
Posted by SUBASH NAMBIAR at 10:14 AM