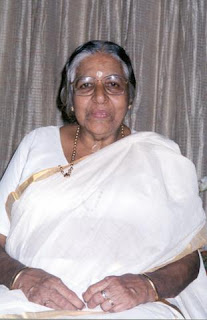 The above is the Photograph of  Madhavi Aunty or Madhavi Amma  with whom I had association for some time. She is the eldest sister of KPR Nambiar the  then Joint Managing Director of BPL.  I used to converse with her on the phone at times and once she invited me for a function at the house of the Joint Managing Director of BPL in Indhiranagar. It was a resplendent evening with many key people.I remember T C Chauhan IAS(Rtd) who was the then Director Administration and Personnel and Mr. L H Bhatia  the then Director of BPL were present and so were many other key people. .I was led upstairs on entry to the house where she was present and happened to spend some time with her.

Much later I came to know she was deceased and my Father and Sister went to pay respects to her.

I just happenned to speak to  her son-in-law Dr.Mukundan who inturn gave me the phone number of his son HariKrishnan, who when contacted was very responsive to send the above photograph almost instantly.

I feel I have done something  precious by putting her photo here.

Posted by SUBASH NAMBIAR at 8:32 AM