THE CONCEPT OF BIG BALL

I have always been an ardent admirer and a player of Basket Ball. Ever since this game was introduced in our school in the early 1970’s I have played this game at few levels. I was formally trained in Basket Ball by a Karnataka State player  Somakumar  who used to play for ITI. It was a one month coaching camp with two hour sessions in the morning and evening and was handled by a bunch of senior coaches. I used to be in the Basket ball  court of NIT Calicut most of the time sometimes even playing in the rain.

Rules of Basket ball have been modified from time to time and now we have a three pointer rule..a penalty area marked by a semicircle and goals from outside this area get three points. Fair enough to the skill of shorter players.

Strictly speaking Basket Ball is an unfair game. I sometimes meet  Mr.Aman Sharma  Basket Ball coach at SAI sports authority of India and we discuss such issues. Unfair because it is widely a tall mans game.Even countries and teams field tall players who have a distinct unfair advantage over the shorter ones. When I watch this game played in some countries some very tall people make a mockery of the game hanging from the basket and inserting almost their complete hands into the basket and the like. Players have evolved and changed but the game has not evolved at the pace at which it should have. 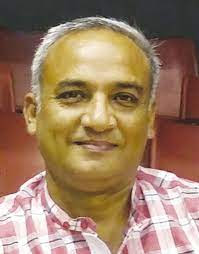 What Iam trying to suggest is that the rigour involved with the game must be increased which would necessitate a new game called BIG BALL being introduced ,very much a modern day Basket Ball but with increased rigour and new set of norms.

The rigour of the game can be enhanced by increasing the height of the basket by exactly one feet…the ball could weigh some 200grams more than the present ball weight; increase the length and breadth of the court by some twenty percent and there could be six players on each side…but THE GAME CALLED BIG BALL WORKS WITH A COLLOSAL RULE.IF THE AVERAGE HEIGHT OF THE PLAYERS IN A TEAM WERE TO EXCEED SIX FEET THEY MUST NOT BE ALLOWED TO PLAY CONVENTIONAL BASKET BALL BUT MUST PLAY THE NEW GAME CALLED BIG BALL.

Sporting pundits around the world must consider this new sport and fine-tune its laws even further..but a new game like this will increase the spoils of the Sporting World and benefit all stake holders.

Posted by SUBASH NAMBIAR at 1:12 AM