Sonal Mansingh exponent of Odissi dance visited REC campus in 1985 or so and gave a spirited  Odissi performance for about an hour under the aegis of SPICMACAY Society for the promotion of Indian  classical music among  Youth. 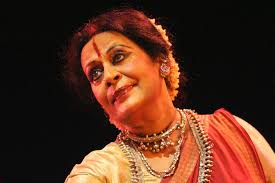 The Auditorium was full and the District Collector of Calicut  along with his wife were present in the front seats. I was sitting somewhere in the middle. It was basically well attended function. She had brought with her set of musicians  and the vocalist and the violonist were simply splendid.

But for an unsavoury event. She noticed some cigarette smoke from some students who were smoking in the back row and stopped here dance to admonish them. The students put off their cigarettes in panic and then was a security staff walking around to see if any one was smoking.

There was a Question-Answer session  and  I asked her what she thought was the difference between Western and Eastern dances and she very nicely replied the basic difference in the use and spread of hands which were more prominent in Eastern dances,

I remember accompanying the Vocalist and the Violinist all the way from the Auditorium to the Guest house. I remember Lalitendu Panda was very excited because the dance form of Odissi belongs to his home state of Odisha and remember seeing him converse with Smt. Sonal Mansingh in their language.

Such events must be encouraged within Campuses which will give Students and others feel of Indian art forms and the one organised at our college of our times is truly memorable and praise-worthy.

Posted by SUBASH NAMBIAR at 9:42 AM