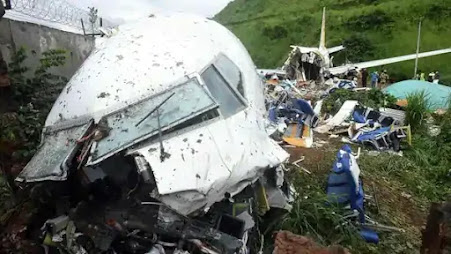 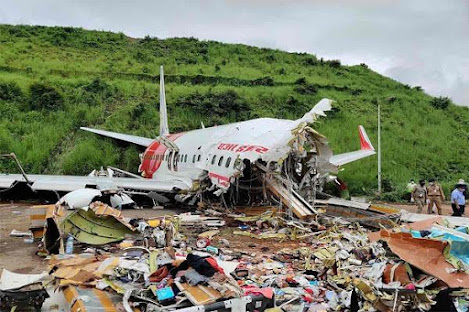 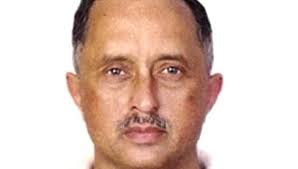 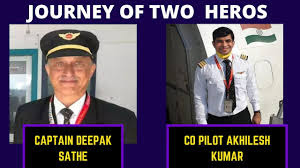 DATE OF CRASH : 07 AUGUST  2020
TIME : 7 41  PM
FACTS OF THE MATTER
💞   PLANE BREAKS INTO TWO PEICES
💞   TAIL PORTION INTACT BUT SLIGHTLY SEVERED FROM BODY
💞    COCKPIT CHAMBER BREAKS AWAY FROM THE FUSELAGE
💞   ORIENTATION OF THE WRECKAGE IS IN A STRAIGHT FASHION AND NOT SKEWED
💞  COCKPIT CHAMBER BADLY CRASHED DUE TO SOME HEAD ON COLLISION
💞  BOTH THE PILOTS DEAD DUE TO THE ABOVE IMPACT
💞  THE DESCENT  TRACT SEEN ON THE HILL IS SLIGHTLY SKEWED POINTING TO A         INCLINED DESCENT PATH  WITH WINGS ALMOST INTACT.
The above plane crash made sad news. The Air India Express flight had taken off from Dubai at 3:45 IST on a trip to Kozhikode also called Calicut in the state of Kerala in India. The captain of the Plane was Mr.Deepak Sathe an experienced pilot and a former fighter jet pilot of the Indian Airforce. Karipur as the airport is called is more than 30 years old and had a very fine safety record until this incident which has left many aghast. Eighteen people lost their lives and many were injured but could have been a more serious accident had it not been for the expertise it appears to me of Mr.Deepak Shinde.
The weather was inclement with incessant rains and higher tail winds on the run-way it appears to me. There are many versions to this incident and I have pieced together various versions and came to the most plausible one.
The pilot had almost landed the plane on the first instance but due to winds noted that the plane had not aligned itself on the run-way it appears to me and took-off the nearly landed plane which only a very experienced pilot like him could have done, this has seen him travel towards the Western Ghats into kozhikode city. What happened thereafter is unclear. His inability to land the plane was possibly due to winds at that time dis-orienting the plane. He has reverted back into the open air of the sea which is more safe from any un-expected tall or hilly structures and this time tried to land the plane from the other side of the run-way so that the obtrusive effects of the wind could be mitigated. He has come out of kozhikode city into the seas it appears to me and re-attempted landing from the  reverse side.
This time the alignment of the aircraft was correct  but if survivor  accounts are to be believed touched down on the run-way a little too inside or slightly too inside from the start of the run-way leading to insufficient run way for the plane to fully stall. At relatively high speed he has tried to brake in panic creating a skid  (of some twenty degree towards the right) and the plane going out of control. It appears to me had there been a fifty metre more leeway this accident could have been avoided.
The plane has descended down the runway plateau some thirty feet the descent appears to be relatively furious with the nose hitting the ground and the cock-pit chamber dis-integrating itself from the fuselage and the cockpit chamber in a free flow collides with the wall of the airport creating a crater and the collision so concentrated takes the lives of the pilot and the co-pilot. Had the cock-pit chamber not dis-integrated and collided with the wall the pilots would have survived with injuries. Through the crater left by the collision the public have poured around the Aircraft and offering help. Eighteen people lost their lives most of them possibly sitting in the front seats and the people in the rear bore the brunt of a violent shake-up leading to fractures and injuries.
It is sad such an event has happened. Ten years back a similar incident occurred in Mangalore killing most on board as the plane caught fire. Both these airports are table-top and the incident has happened during night when visibility is poor.
My observation is that the International Airport at Cannanore(Kannur) must be used to land any air-plane coming from the Gulf which has some complexity in landing procedures istead of resorting to audacious procedures putting lives in peril. Planes to Mangalore or Kozhikode facing any form of  landing difficulty must be routed to Cannanore airport for a brief stall and let to proceed to their destinations only after the conditions are brighter and the last thing anyone likes to see is  a large plane tossed down the hill like a toy creating disastrous results.
Posted by SUBASH NAMBIAR at 1:52 AM