TRIBUTE TO A FATHER

Its more than an year my Father is dead and it would be misleading and inappropriate if I dont write a lasting tribute to a man whose basic dedication ,abilities and orientation postured the lives of his family into a progressive domain the benefits of which successive generations in this city would enjoy.

My Father came to this city from the rustic environs of a place called Narath in Cannanore to work at the Indian Telephone Industries in 1954 and put nearly 38 years of service there with staff number 5862 and what a rare coincidence his hospital registration number being  8562       ..note the similarity of numbers.He lived and died by these numbers in this city...8 is my lucky number and all through life I got Economic benefits from him. 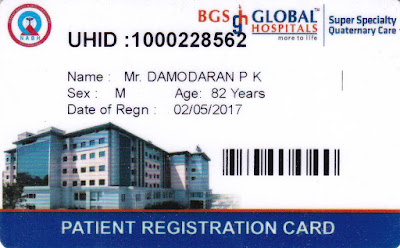 My most earliest memory of my Father is being in his arms when my Mother and Father were moving into a rented house at a place called Kothur very early in the morning trekking an almost four kilometers from the house of my Aunt .It was wee hours and the Bangalore cold gave me a jolt and at that age of infancy could take cognisance of him and my mother walking behind with a green brief case.It was a trek and journey of sorts which would force us to stand on our legs as a family with minimal support around.

Later on my brother came and I remember his association from the Gopal Building a house where we stayed as children for around an year in 1971.When the war with our neighbouring country on A blackout would be declared and all the houses would switch off the lights in the house.I remember this incident with fear thinking we could be bombed.One of the turning points of our life was when my mother decided to buy a site first to which my Father was largely opposed.The same year We bought a site and even built a house moving into the house in 1972.My Father;s industry came handy as he strived to complete the building of the house. Life began to change for me and my brother after moving into this house because we could be independent and spend more time on our educational activities.

More often during these days our Father used to take us to Bangalore City for movies and also once inside the Vidhana Soudha and we used to stop at some hotel for Masala Dosa.He used to take me to Chinese dentists on M G Road to get my tooth extracted and annually during school re-opening my brother along with my father used to visit Avenue road to buy books for the next season.Then we used to go to Bata outlets for school shoes and to Binny showrooms for Uniforms.Enter the Dragon,Bobby, Benhur are all some of the movies I remember he had taken us to..he used to take us to football matches in Bangalore stadium and KSCA stadium and also to political rallies of Mr.Morarji Desai and  Mr.Jyoti Basu.

If Iam not mistaken in the september of 1972 there was a theft in our house by a theif by name Krishna who entered our house when my mother had gone in the afternnon with lunch for me and my brother and all the gold ornaments of my mother were stolen.This was an harrowing time for us.Miraculously the theif was caught six months down the line in Shoolay police station limits and I remember visiting this police station as a kid as the police wanted some statement from our family.Let me place on record that the family of O K Nambiar helped us with influence in the higher echleons of the Police department. My father did higher order industry in collaborating with the Police and the courts all single   handedly   without any complaints or remorse and worked to the successful completion of the tasks.No one could have done this better.

My Father had a pair of skilled hands.He was good at working on mechanical things with dexterity and that skill came handy at the workplace.He had by and large a very realistic and pragmatic approach to things.He had accurate assessment of situations most of the time and took realistic approaches and the will to get things done through perseverance.

My brother Sunil and myself during our very formative years used to get into physical fights.Most of the time he used to be the winner.Our disposition to  fight was a very concerning thing for my Father and he used to discuss it most of the time.When he used to go on the first shift early in the morning he used to almost wake both of us from sleep and warn us not to fight.After he began to do that we stopped fighting.

One of the earliest memories of my Father is waiting near the Lowry Memorial School gates for him as a very small boy. His shift would be over at 4:15 and he would come to the school gates by around 4:30.I used to feel tense until I saw him  and I could see him crossing the rails and that used to give me great joy.

In 1973 my sister was born and our house was a huge blessing. As we brothers grew up we were fit enough to go to school and come back all by ourselves.The problem sometimes is that we would get sick and our father has many a times taken us to the ITI hospital accompanying us most times.

We were largely a cosy family..the industry of my Father...the administrative skills of my Mother and the co-operation among children saw us tide through with relative ease the challenges of living and add to that the benevolence of the Public sector ITI and a school at walking distance from our house.

Most of the time when he came from work he used to bring something for us to eat.I used to accompany my father many times to Kambi Shivappa stores in Avenue road to buy groceries..he had a penchant for quality and rarely compromised on it.

Posted by SUBASH NAMBIAR at 4:11 AM