These three places in Uttara Kannada district of Karnataka state was always a matter of confusion for me and I decided to solve this confusion by visiting these places myself. I have travelled upto Murdeshwar and was curious about what lay ahead. I take a holiday once in six months a very short stint at some place of interest.

I called up a hotel in Gokarna almost got an instant hotel reservation and was worried about the weather but forecasts for the weather were not bad and I decided to make my short spurt and found a VOLVO bus almost ready for departure at the Majestic bus stand and got into it. I was told the bus would traverse through Shimoga, Sagar, Siddapura ,Sirsi, Kumta to Gokarna.

After some time I occupied the special seat adjacent to the driver and was chatting with him  till Shimoga and I thought it time to take a nap and almost early morning woke up at Sirsi and thereafter went back to the seat beside the driver for the rest of the journey through what is called a State Highway 69. I was wearing an NIT Calicut jacket which protected me from the cold in these areas. From Sirsi through narrow roads laced with rivers and rivulets and almost meagre sign of population around I was chatting with the driver who was manning the bus through a road rid with pot-holes  through this entire stretch. These VOVO buses have to praised for its speed ,ease of control and its ability to withstand very bad road conditions. Some seventy kilometres from Sirsi the bus intercepts the ARABIAN COASTAL ROAD a road that for all practical purposes runs alongside the Arabian Sea coast sometimes almost touching the sea and at times distancing itself from the sea. At many places it is four lane.

At Kumta I had breakfast at the hotel in the bus stand and thereafter the bus proceeds to Gokarna. Note a very important point. From Sirsi to Gokarna it is not mandatory to be at Kumta. You can directly go to Gokarna by turning right at the Junction on the ACR(Arabian Coastal Road). KSRTC buses come to Kumta as a matter of procedure set in the rules.

From Kumta the bus proceeds to Gokarna. Some kilometres ahead the bus leaves the highway and turns left into a road which resembles a simple city road some ten feet in width and bus travels through river beds and some twenty kilometers ahead is Gokarna. Gokarna has the Mahabaleshwar temple dedicated to Lord Shiva. 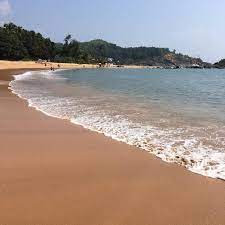 Every thing said and done I liked this place called Gokarna. Friendly people with excellent eat outs all around. I had a stroll down the road to the Mahabaleshwar temple and down the road is the beach. The beach at Gokarna is small may be some hundred meters in all with very attractive surroundings.

Something about these places Kumta, Sirsi and Gokarna. SIRSI is not a coastal town but a place like Madikeri or Sringeri in the bosom of the Western Ghat mountains some seventy kilometers from the Arabian coast. KUMTA is a city on the Arabian coast on the Arabian Coastal Road some sixty kilometres north of Bhatkal and Murudeshwar.

Posted by SUBASH NAMBIAR at 8:08 AM